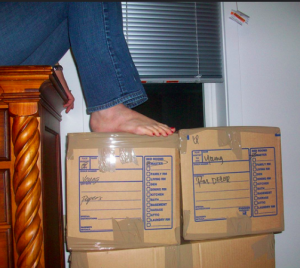 My oldest son died of cancer when he was just twelve. That was fifteen years ago tomorrow. I miss him. Terribly! For weeks following his death I had to force myself to enter his room. I had heard others speak of it. Now I was experiencing it. Little things made me weep. Larger things, such as the sight of his favorite soccer ball on the dresser made me want to scream. The open Bible still on his pillow warmed me some. In moments like this, you don’t want to change anything. For days, sometimes months, you stand at the door and just stare. The room becomes sacred. For some, an unhealthy shrine. To move something almost seems to betray the memory. Or to remove the memory. I have heard of some who become obsessed. Others lock the door and deny others entry. I did not ever want to become that parent who refused to let go of his child. He is gone. I will never see him here, but I know I will see him there. I am convinced of that. It’s what keeps me going. So, one day, Elaine and I took a box and packed his things. Some things we gave away. Others ended up at the Salvation Army. It was good for us. Some item warmed us. Other items made us cry. But it was good for us. It helped us move on.

There comes a time when a grieving pastor, or anyone grieving loss, needs to let go. A pastor friend of mine resigned from a difficult church, but remained in the same town for one year. (I have his permission to share this.) Seeing the same people, passing the building, reflecting on events would draw him back in. He would stand at the door of that memory and see things as they used to be. He fought back anger and tried in vain to relive, to reclaim, what was gone. It rarely felt good, or right. A day came, and comes to all grieving pastors, or anyone who has experienced some kind of loss, where the packing becomes a moment of healing. An admission, a healthy acknowledgment, that Jesus gave those years to you, but now has a new place, a new season. Letting go is often the door to that place.