Much of the contemporary music I listen to and preaching I hear leaves me feeling like I am not doing enough for Jesus. While driving home yesterday, with time on my hands, I reached over and pushed the button on my radio and quickly reduced the volume as the song’s heavy beat swept through the cabin of my car. I hummed along to a familiar and popular song, drummed my fingers on the steering wheel, but abruptly stopped as the repeating words struck a resisting chord in my heart. When I do turn on the radio it’s usually for background noise and often I pay little attention to the words. Unlike my two children, I’ve never been that good at “singing along” when a song plays.

This time was different.

What I heard clashed with where I am in my life right now, where I know I should be. I slowed the car, and leaning in to catch every word. The song, obviously intended to rally a young generation to rush into the battle field with passion and all out gusto.

The growing unease with the core message, though, pounded hard against the framework of an already tired life of trying to do all I can, or more, for Jesus. Songs like this come with certain assumptions about redemption. About salvation. It assumes that we are saved to make a difference, and for this generation especially, to change the world. It also leaves a lot of Christians feeling inadequate when an inventory of their lives points to failure. Most of us just don’t measure up. Our lives, at least most of us, are rather ordinary. We aren’t thriving. Press deeper and many I know are just surviving, but they still love Jesus. Their lives aren’t making headlines, but they seek to obey him daily, even in the small stuff. Pretty ordinary stuff. 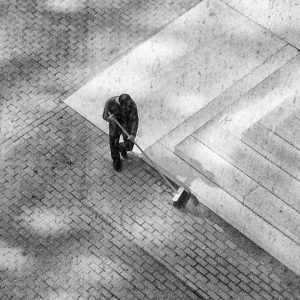 By the time I pulled into my driveway my fists wound tight to the steering wheel. Coasting the car into the garage, I relaxed my hands and turned off the radio, quietly needing a few minutes to sort through my unease. The fact is my life is pretty simple and I am actually okay with that. What’s wrong with ordinary, with managing another day without huge outcomes? I muttered to myself. Are we called to do great things for God, or are we called to be faithful to him even in the small things of life?

I don’t think this message come out of a vacuum. There is theology behind it, tossed off a doctrinal stage where singers and preachers rally a young and restless generation to greater commitment and new heights of surrender, while marginalizing the older generation for having failed.

The call to thrive, to do more than we are doing, over living ordinary lives that glorify God and enjoy him forever becomes counter intuitive. Bluntly put, it can backfire. Eventually those who follow it run out of energy and settle at best for ordinary, at worst for disillusionment. Men are restless by the ordinary responsibility of providing for their family thus missing out on their greatest calling, at home, or young people travel the world hoping to leave at least a dent on global evil, only to return defeated and discouraged because they did not meet the demand placed on them by that song or from the preacher. Pastors face discontent over a church that fails to grow despite his faithfulness to preach and love his people as the scriptures call for. (2 Tim. 4:2)

So I guess my question is, what’s really wrong with ordinary? Weren’t we made, created, saved, to love God and enjoy him forever? (The Westminster Shorter Catechism). Did not Paul urge us in whatever we do, to work heartedly, as for the lord and not for men? Aren’t we ordinary jars of clay to show that this all surpassing power is from God and not from us? (2 Cor. 4:16). When Paul explains that preachers, teachers and apostles exist to equip the saints for the work of ministry, for building up the body of Christ, (Eph. 4:11) he later illustrates what that work is in Ephesians 5 and 6 as a husband loving his wife, a wife submitting to her husband, children obeying their parents and slaves (employees) obeying their masters (employers) with fear and trembling.

The Great Commission does not call us to change the world, as much as it calls us to go into that world and make disciples, baptizing them in the name of the Father, Son and Holy Spirit and teaching them from everything Jesus taught the disciples. Changing the world is a responsibility that belongs to the Holy Spirit, our part is to tell the story wherever we are, whether people respond or not. The mark of my spirituality is not measured by how many respond to that message, but rather my faithfulness to the one who called me.

I’ll settle for that ordinary task any day.

Men who preach that we are to change the culture put unrealistic expectations on the lives of the flock. We’re sheep, not Iron Man, called by God to follow Christ, not to change that which we have no power to change. -Timothy J. Hammons