I love healing stories, even though I do struggle with why God often doesn’t heal. When pastoring, we often celebrated with those who gave Jesus the glory for his obvious touch in restoring them to health. My wife nearly died 18 years ago. Today she’s far exceeded all our  expectations. I still remember the surgeon following the surgery telling me there was a chance she would never speak again. If you know Elaine, you rejoice with us how God graciously gave her back her speech and so much more. 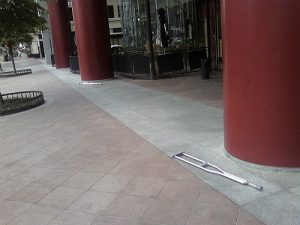 Our family rejoices often over our youngest son’s victory in his battle with lymphoma cancer. Having lost our oldest son to brain cancer, Brett’s healing is so much more precious to us. I also recognize that had God not intervened I would have struggled with life-long depression that began in middle school and stayed with me all through high school.

There is no doubt God intervenes in our lives.

I am one, though, who lives with a tension when it comes to healing. Claims of healing-miracles often make me uneasy. Sometimes I feel guilty for my skeptical reaction to purported healings. I’m often left cynical, not convinced that a genuine, truly remarkable, no-other-explanation-than-Jesus miracle has taken place. Too much about it leaves me unsure. My most recent struggle came after viewing a video where a short-term mission team to South America, while on mission in a village, recorded the miracle of a young boy with deformed legs walking for the first time. I honestly rejoiced, but part of me remained confused as the video showed him walking, but his legs still severely deformed. I tried in vain to ignore that voice that came from deep in my spirit, where cynicism dwells, which protested, wait! If a true miracle had taken place, yes he’d be walking, but his legs would have also been restored. Straight. Not completely twisted and bent.

I have some people very close to me who even though God spared them, strokes and brain tumors have left a lasting mark. They are not fully healed.  Others, also close to me, will more easily than I, refer to their progress as a true healing-miracle. On a few occasions I will say, no, what you are seeing is evidence of God’s grace and mercy, his measuring strength given in weakness, but no, don’t call that a miracle. Call it a miracle when all disabilities have been replaced by the abilities that existed prior to the injury.

So, I live in tension. I love the stories. I praise God with others and even for how good he’s been to me and my family, but I long for more. And I long to understand why the healings I see and hear about are sparse and dare I say, not all that impressive when placed in the light of the gospels.

My struggle has been really good for my faith. It should be for yours, too. Think about it. The fact that God doesn’t always heal, or for me, hasn’t fully healed, pushes me to long for heaven, for an eternity and life with God where sufferings will have ceased and sicknesses will be a distant memory, if even memorable at all. I can’t accept that God is a God of half-jobs. I prefer he would invade into our tragedy and reverse a condition that has no other possible explanation, and what he does would be so complete and full, and thorough, we are left in jaw-dropping-awe. A God who does better than removing backaches and headaches. While I believe there are places and times even today when he does all this, they are rare and distant from us. Usually they come to me by third or fourth hand stories, not something I have personally witnessed. Often from remote regions where the gospel has yet to penetrate.  I would love to see the kind of healing-miracles like we see in the Gospels when Jesus healed every possible condition, or in The Acts of the Apostles when the Apostles touched and spoke sickness and death away.

Again, my struggle over healing miracles has actually been good for my faith. It makes me long for more than what we see around us. The fact that God doesn’t heal as much today as we see in the Gospel period, or rarely heals, (some say, never heals) reminds me that sin has to run its course. Even the healings we read about in scripture were not lasting. The man brought to Jesus by four friends did later fall again to weakness and eventually died. The ten lepers touched by Jesus, while cured of leprosy succumbed later to another sickness that caused death. Furthermore, and a comfortable explanation for me to accept that healing is less prevalent today than it was in the Gospels, is that all of Jesus’s miracles were both tokens of his authority over death, and his way of establishing his credential to perform a greater, more lasting miracle, that of forgiving sins. When Jesus saw their faith, he said to the paralyzed man, “Son, your sins are forgiven. Now some teachers of the law were sitting there, thinking to themselves, “Why does this fellow talk like that? He’s blaspheming! Who can forgive sins but God alone? Immediately Jesus knew in his spirit that this was what they were thinking in their hearts, and he said to them, “Why are you thinking these things? Which is easier: to say to this paralyzed man, ‘Your sins are forgiven,’ or to say, ‘Get up, take your mat and walk’? But I want you to know that the Son of Man has authority on earth to forgive sins.” So he said to the man,“I tell you, get up, take your mat and go home.” He got up, took his mat and walked out in full view of them all. This amazed everyone and they praised God, saying, “We have never seen anything like this!” (Mark 2: 5-12)

Today we have sufficient testimony and record of God’s power over sin in the gospels themselves to point people to that same power over death, and authority to forgive sins. I guess what I am saying is, perhaps one reason we see far fewer healing miracles today is because they are not needed as proof of God’s power over death and authority to forgive sin, because the story of Jesus and what he did on the cross is enough. And we have the prophetic word more fully confirmed, to which you will do well to pay attention as to a lamp shining in a dark place, until the day dawns and the morning star rises in your hearts …(2 Peter 1:19)

I ache deeply for the several people very near me who await their full healing. I agonize with them over the day to day struggles, and sometimes come short of truly understanding the depth of their pain. I live daily with the promise unmet of seeing full healing. That ache barely touches what I know is a deeper burden they carry. Yet, we long for the day, that day, when finally, because God has power over death, and because he has authority to forgive sin we will be fully healed. What we will experience, all of us, will be more than a token gesture by Jesus to affirm he is who he claimed to be. The gospel makes me long for full restoration. In the meantime that same gospel does not promise healing, but it proves and promises that God has authority over death and the power over sin. The proof is not even in the healings Jesus performed, but ironically, in his willingness to face death and to take on himself the full penalty of our sin. The proof is in the cross. And the resurrection – something we now get to wait for. Well, actually, I can hardly wait.