My wife and I sat across from a young man who’d just returned from the mission field. After meeting with him three times, I found him to be tender, full of grace and longing to see his life used effectively by Jesus. Yet, here he was, wounded and desperate to find someway past the hurt that now replaced the youthful vigor from years past. Two years ago he left for a foreign country, eager and confident that God would do great things through him. Now he wondered if there was any way to rebound from the disappointment and disillusionment of team conflict and lack of fruit. 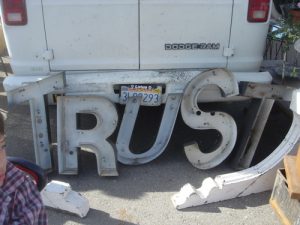 It was the team conflict that forced him back home. I’ve also seen this sort of thing happen. Often you get along better with lost people who are far from Jesus than those partnering with you to take the gospel to them.

My elbows rested on the table, and I leaned forward, my way of letting him know that he had my full attention. That’s when the bombshell came, said with conviction and emotion. My elbows pulled back and I sat straight. This was the real reason he was here. It took three weeks to get to it. And what he said started a long conversation.

Yes, I murmured only to myself. I know that feeling. Been there, done that. However our new friend was proposing something I wasn’t going to agree with easily. I’ve heard it often. It was the notion that if you cannot trust people then something is wrong, out of whack, and before you can ever be used again, trust has to be restored. You might as well move yourself out of the game, and find something else to do. Because we all know that Christians are all supposed to get along, and loss of trust is a huge breach to the harmony the Bible calls for. Where there is lack of trust, the people perish. (Sarcasm intended).

I pulled myself away from my own thoughts and asked him, “What makes you think you have to trust them? I mean, after all, you did everything you could to address sin; you showed love, and they still stabbed you in the back. Do you really want to trust them? Should you trust people who are bent on doing you harm?”

I then gave this example. “Suppose you’re married and have several children, and a robber breaks into your home. Would you not rush to stand between the robber and your family? You would never consider trusting a robber who’s barged into your house intent on stealing from you. So why would you trust anyone who has robbed you of your joy and ministry?”

Tom nodded, his eyes attentive, so I continued with another example. “Or suppose I take my granddaughter to the Grand Canyon, and near the edge I let go of her hand. Would I trust her to not walk too close to the edge on her own?”

“Of course not,” Tom replied, his furrowed brows now relaxing to match the the growing encouragement that came with this conversation.

“Tom,” I continued, “I counsel couples where the husband was unfaithful to his wife. You would not expect the wife to trust him for a long time, would you? But I do urge her to love him. Not trusting him will actually strengthen the relationship. It makes him accountable. She has to be on her guard, and that’s good for him. Eventually, her love will allow him to earn that trust again.”

Tom tensed, wondering where I was going with this.

“Sometimes,Tom, not trusting is important in developing a healthy relationship. I’ll show you in a moment how we are commanded to love others, but not necessarily by trusting them. But I’ll get to that soon.”

I think my friend was getting it.

“Tom,” I chimed, “tell me where in the Bible we are commanded to trust other people?”

We then discussed together how there are more places in the Bible that warn of us being too trusting. Consider the following:

Put no trust in a neighbor; have no confidence in a friend; guard the doors of your mouth from her who lies in your arms; for the son treats the father with contempt, the daughter rises up against her mother, the daughter-in-law against her mother-in-law; a man’s enemies are the men of his own house. -Micah 7:5-6

It is better to take refuge in the Lord than to trust in man. -Psalm 118:8

But Jesus on his part did not entrust himself to them, because he knew all people and needed no one to bear witness about man, for he himself knew what was in man. –John 2:24-25

Tom and I decided we’d covered plenty of ground for one day. We agreed to continue the conversation next week when we will discuss how loving can open the door to forgiveness, and how ultimately God wants reconciliation, and trust can be the outcome. We said goodbye, and I stepped back into my office. I had my own thinking to do. I plopped down on my recliner, pulling back the lever, forcing my feet up. The recliner faces a large window, and through a spread of branches I could see several of the Smoky Mountain’s special peaks. I sighed and reflected again on my own struggle with trust, longing for the reconciliation which to this point remained unmet. I allowed myself to think about the man, who claimed to be my friend, yet turned many against me in a recent ministry. And it cost us that ministry. Because I now counsel in a room down the hall from his office, I’ve learned to love him, evidence by the fact that because my heart is filled with compassion for him every time we talk. I pray for his business to prosper, and rejoice that it has. But right now I cannot trust him. Loving him allows me to live comfortably with that tension. However, l long for him to see his sin, as I see mine, and for the gospel to produce reconciliation so trust will be restored, but that is an outcome of when the Holy Spirit has equal access to each heart. In the meantime, I am comfortable loving him, absent of trust. Looking up again at the mountains, I then thought about Jesus and how he did so much better than me in this arena. Yet, he did it as an example for me and for Tom and people like us who live daily, rubbing shoulders with others who have caused us pain. I thought again of John 2:24-25 how Jesus on his part did not entrust himself to them, because he knew all people and needed no one to bear witness about man, for he himself knew what was in man. But he loved them, and died for them.

Like Tom, I used to feel guilty that I could not and would not trust certain people. But now I understand how the best thing I can give them, for their own growth and sanctification is to be guarded around them. But I will love them, despite how they might have treated me. And that’s been great for my own growth. In fact, to keep loving people who’ve hurt me and might hurt me again is one way to see the gospel at work. And it is that gospel that allows for a forgiving heart and leads to repentance and ultimately to reconciliation, where yes, trust is possible again. In the meantime, I will keep displaying the love of Jesus.

The world needs to see more of that.